Arriving on the Yorke Peninsula

Now, we didn’t know the Yorke Peninsula was going to look like this.  We almost drove past and ditched the whole ‘boot’ in favour of a shorter road to the more famous Eyre Peninsula.

We left the Barossa Valley without any great plan,  just a general direction, and a vague idea.  It often seems to be a great way to travel!

We came across Port Hughes.  It was a great place to while away a hot afternoon in the absolute crystal clear ocean. 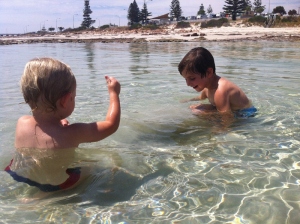 We had time to train the boys:

Before a wander along the town’s jetty. 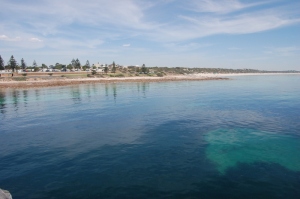 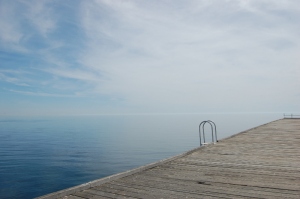 The jetty was lined with a few stalwart fisherman who showed off their catch.

The sea was so flat, and it was so deathly still that the jetty seemed to be hovering in mid-air.

It was here that we decided to continue south, to see what else this place might have to offer.  After another hundred kms or so, we found ourselves a pretty epic free camp spot called Barker’s Rocks.

There were a lot of flies, and burrs, but also a beautiful soft white sand dune, and a stunning little swimming hole. 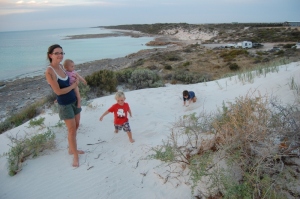 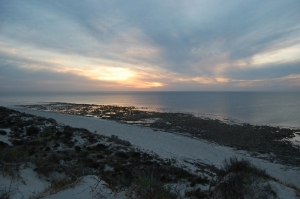 It was a very nice spot to wake up in!

But we suspected greater things awaited us down at Innes National Park.  And we were right.

We had another boring drive to get to Marion Bay Tavern for the famed steak burger.  We were racing the clock as we knew the kitchen closed at 2pm so as we arrived at 1.45pm, I jumped out with the car still running and sprinted inside to order leaving Brian to gather up the tots.  Great success!

The emus couldn’t stop us from getting to the beautiful campsite at Pondalowie Bay.

The place was crawling with emus!  And kangaroos everywhere too.  This guy was trying to suicide under Brian’s car wheel. 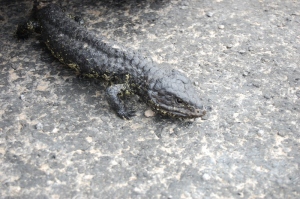 I think it’s a shingleback?  Cory would have known.

It even rained for 2 days non-stop but that still didn’t dampen our spirits.  Brian was desperate to try the surfspot out, 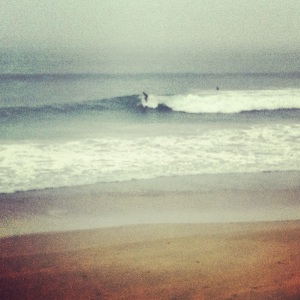 but it was along a 500m track through the dunes and he didn’t want to go by himself due to the possible presence of a certain large fish with lots of teeth….

So we all came along for moral support.  And the surf was good!  No toothy fish either.  That we knew of. 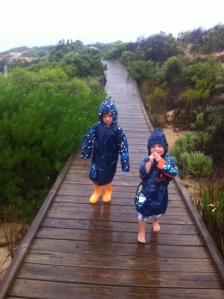 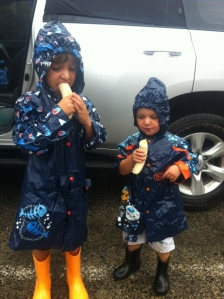 The boys finally got to wear their cool new raincoats and we topped up our water supply with the runoff so we had enough water to have proper baths rather than a wet washer!

The good thing about the rain here is that it comes with warm weather instead of that miserable cold rain we were suffering through in Victoria.

We spent a few lovely nights here, despite the rain.

The locals were very happy to see it which made for a pleasant atmosphere everywhere we went.  The pub’s always a great place to spend a rainy afternoon and we could nurture Daisy’s new chip obsession while we caught up on some winter olympic viewing! 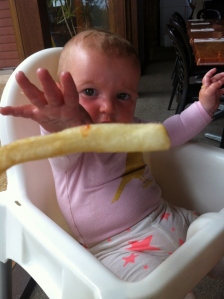 The beaches were the whitest sand, the cliffs towered, the waves crashed, the beautiful botanic garden-esque shrubbery abounded, the wildlife was prolific, and we soaked it all up! 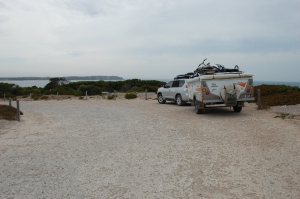 South Australia is full of these remote beaches and beautiful scenery.  I hope they all don’t start looking the same!  You know in Europe how you get ‘all churched out’…..  In SE Asia you get ‘all templed out’…… Here you get a little bit ‘all stunning coastlined out’ ….. If you know what I mean.