All the way to Broome

Tonight I am sitting at the gateway to the famous, or infamous, Gibb River Road.  We are just outside of Derby, on Birdwood Downs Station.   Now that we have finally got the kids to settle down, I can get this blog up to date using the sneaky couple of bars of reception on my phone as its perched halfway out the window.

We are poised to visit some spectacular gorges coming up in the Kimberlys over the next few weeks.  But our love affair with gorges started in Karijini National Park. 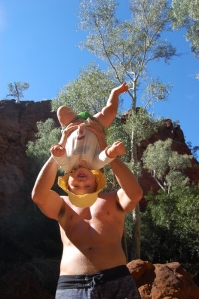 The red dirt got under our skin after a while, but it was a beautiful, peaceful spot to stay for a few days.

We clambered down hills, over rocks, through gorges, jumped down, climbed up, hiked around and marvelled at the spectacle that was Circular Pool.

A deep, cold pool which got virtually no sunlight at the bottom thanks to the angle of the sun.

It was freezing cold, but the water trickling in from around the fern filled cracks and crevices was surprisingly warm so you just had to brave the swim across the pool to sit under the falls.  What a magic place! 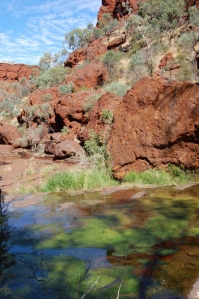 The campground was huge, it must be absolutely heaving at times, but because the walks were steep, a lot of people just did the daytrip to the lookout so the gorge floor was fairly quiet.  The boys had fun on the walks, but drew the line at swimming! 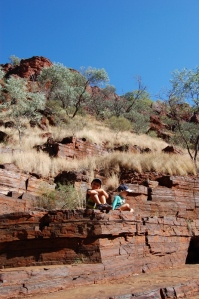 Fern Pool was at the other end of the gorge. 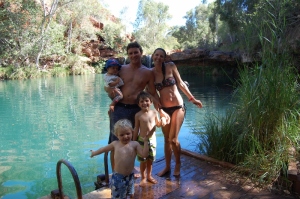 This one was turquoise, and lined with ferns and waterfalls.  It was another challenging and fun climb to reach, and you were really thankful for the delightful cool swim at the end!  Especially after carrying Daisy and coaxing the boys all the way.

We had a quick pitstop in Port Hedland to check out the port.  It was a bit of barren plain with a lot of industry.

Lot of workers and shacks and workcamps.  For the first time, we had to buy frozen bread from Woolworths!  Shock horror!

Just out of town was an awesome free camp called De Grey River. 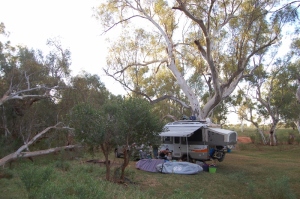 It was just a rest area on the busy Highway 1, but on closer inspection, we discovered a plethora of peaceful campsites lining the river.  And no, it wasn’t grey. Apparently there were crocodiles, definitely there were campfires!

This is where we invented what is to become our new trademark – the toasted marshmallow Tim Tam.  Unfortunately we are still waiting for our next campfire so we can have them again!

Eighty-Mile Beach proved to be one of the most surprising stays on our trip!

It didn’t get much praise from former visitors, so we weren’t expecting much, but it was an easy place to drive to within 150kms of Broome. 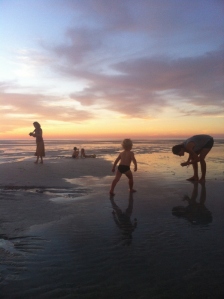 We had been travelling parallel to a lovely family in a Windsor Rapid since Denham and together, we enjoyed some brilliant sunsets on the 80 miles of sand with a glass of wine or 2. 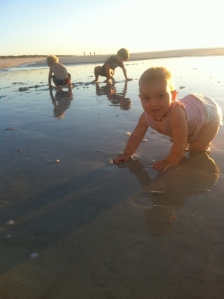 Their kids Rose and Zilcomo really hit it off with ours so we had some great days of doing not much while the kids either played quietly or tore around the spacious park. 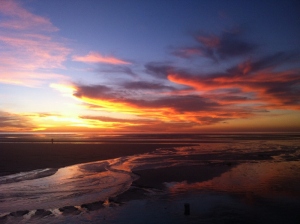 There was a kiosk for ice-cream o’clock, markets on Wednesdays, lots of fishermen (but no fish) and a wonderful holiday atmosphere with phone reception miles from anywhere.  It ticked a lot of boxes!  We even ran into Mario and Enid from Mirani there who were some of Mum and Dad’s oldest friends.  Definitely the place to be!

Broome was the long-awaited goal of a destination.

As we drove in, we were struck by the beautiful tropical gardens, the houses built with colourbond steel walls and no guttering! 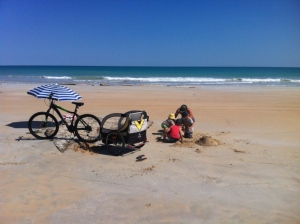 When it rains here, it rains properly so the gutters are just overwhelmed.  The famous Cable Beach was so named for the communications cable that arrived here to connect us to Indonesia and then the rest of the world. 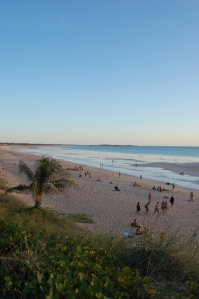 It was a pretty, wide beach with the usual white sand and blue water.  There was a crocodile sighting while we were there too!  At sunset, it was the place to be, with hundreds of cars and camels lining the sand. 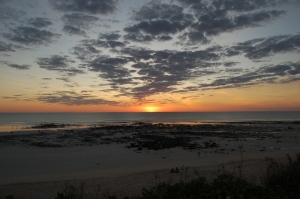 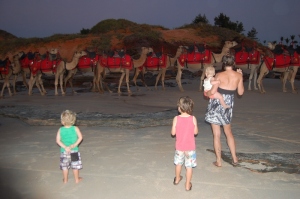 There was the fabulous Matzo’s brewery 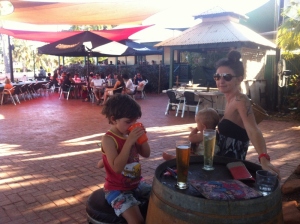 with a Mango Beer and a Lime and Ginger Cider (you can get it at Dan Murphy’s – score!) lots and lots of tourists and the tropical Chinatown full of overpriced pearl shops and an outdoor cinema. 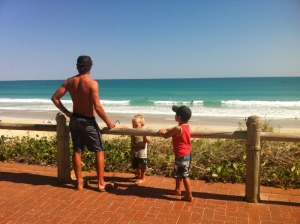 Chinatown used to be called ‘Japtown’ for the hundreds of Japanese divers who made the Pearl industry what it is here, but the name was changed after WWII.  We stayed at the Cable Beach van park and we absolutely loved the shady sites and our proximity to the pool.  So, we stayed for a week. 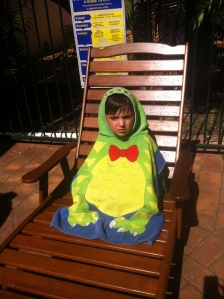 A day trip up to Willie Creek Pearl Farm was nice.  We almost went on a helicopter ride after watching it take off and land a few times, but decided 5minutes just wasn’t enough. 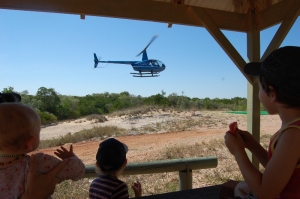 All over the remote coast of the Dampier Peninsula there are these tracks and we followed a couple of random ones looking for some special spots. 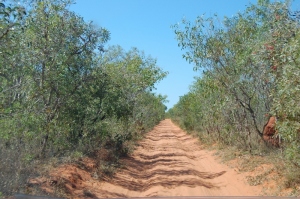 We only really found aboriginals catching mudcrabs, but it was fun exploring!

Broome is about to hit “peak” on the tourist scale so it was time for us to skedaddle.  Next stop…..The Kimberlys!!!!!!

2 thoughts on “All the way to Broome”